The following is a transcript of my recent interview with Wayne Bucklar from Vertical Internet Media on why the Philippines is the only choice for knowledge based outsourcing. The interview can be watched on YouTube here.

Wayne Bucklar: My guest today is Jamie McBrien. Jamie joins us from Australia. He is the CEO of optiBPO and he is here today to talk to us about his work in offshoring and outsourcing. Jamie, welcome to the program.

Jamie McBrien: Thank you Wayne. Thanks for having me.

Wayne: Why have optiBPO chosen the Philippines for its outsourcing services?

Wayne: Now, I would have thought that India was the global leader? 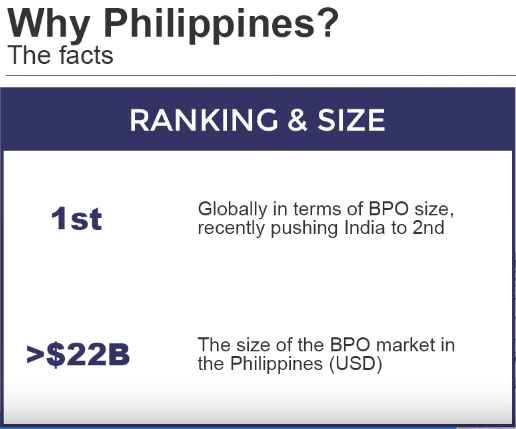 Question: Where does the Philippines place among outsourcing countries?

Jamie: Yes, well look India is still good at specific areas,  particularly in the IT space, but in knowledge-based outsourcing which what we do, the Philippines has leapt ahead of India with better retention rates, better costing, and better attraction of capability.

Wayne: Does the Philippines have a solid economy to support Western firms into outsourcing?

So, really in terms of the more mature developing economies, the Philippines is the fastest growing in Asia at around 6.8% GDP growth. Interestingly though, even with that growth, people have concerns around labor costs and increased labor costs. Labor costs have remained fairly steady for the last couple of years, and there’s not a whole lot of upward pressure.

This is helped out by the fact that the government has a high level of support for this as an industry, regardless of what some of the media might say about the Filipino government. 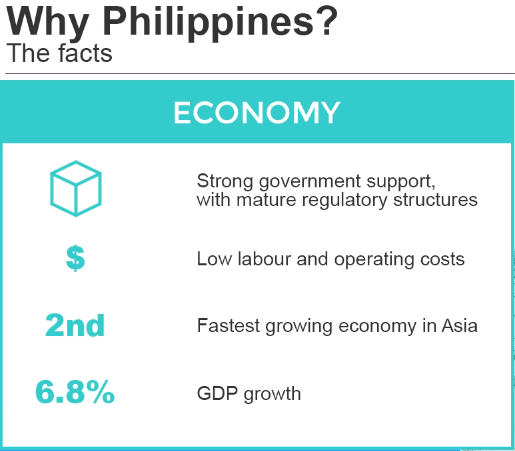 Wayne: What is optiBPO’s view on the media coverage about the Philippine government?

Jamie: From an outsourcing perspective, this is not having any impact on us. The Philippines is a country of over 100 million people, and over 1,000 islands. Sure there’s parts in the Southern part where there has been some issues. Those issues are a matter of history, and I’m not here to argue about that history.

This has been happening for a long period of time down towards Indonesia and Malaysia, and it has previously been isolated. It has flared up recently, but it’s not impacting on the big BPO locations of Manila, Clark / Angeles and Cebu which are a fair distance from that, and really I don’t see any impact.

Wayne: Should Western firms looking to outsource need to be concerned about current news about the Philippines?

Jamie: I think in the larger metropolitan area what the Western media is reporting on really isn’t impacting. But again, I need to reiterate, the Philippines is a country of 110 million people. I don’t want to negate or gloss over the fact that these sort of issues are real and they do impact on people.

But again, if you look through the United States, Australia, the UK, they have their own domestic issues that they are working through.  Some people might not agree with the Philippines government’s approach to some of those issues. But for us, it’s really not impacting on outsourcing or offshoring as an industry.

Wayne: What is optiBPO’s view about overseas staff in the Philippines with English as their second language?

Jamie: English is the language of the Philippines. It’s the third largest English language speaking country in the world. All of the laws, the legislation and courts run on English. Kids learn English at school from an early age, and it’s not English as a second language. 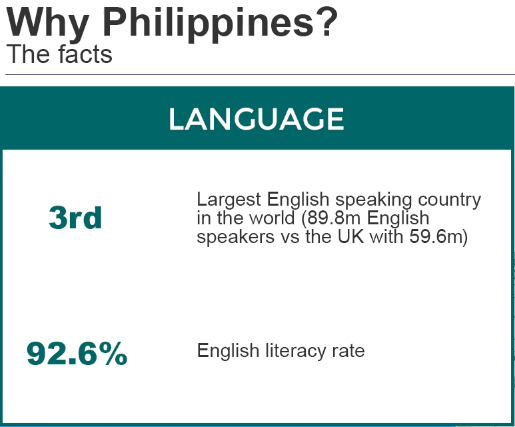 Wayne: That’s an extraordinary finding. It must rank very highly in the world.

Jamie: Yes. It’s the third largest English language speaking country in the world which again, it shocks a lot of people, and clients and friends but I let them know that yes, third in the world.

Wayne: What is optiBPO’s view of the Philippines’ adaptation to technology and social media?

Jamie: I think that’s one of the really interesting things that 110 million people around 400,000 University graduates a year. The average age of the Philippines is 22 which is such an extremely young population. They’re the 10th largest user of Facebook in the world, the 6th largest user of Twitter.

I bring those numbers up just to demonstrate for the fact that not only are they young, they’re highly educated, they’re qualified, they’re capable and they’re engaging in new technologies. In the end, all our businesses are getting out there looking in innovative ways to do that and I think that those statistics demonstrate the fact that that is absolutely the case here.

Wayne Bucklar: Is the Philippines’ young workforce different from the rest of the world?

Jamie McBrien: Yes, on average the Philippines is young. In countries like Australia, we’ve got a growing an ageing population, well above 22, and increasing every year. Having a young pool of talent to be able to support an older generation in our own countries, it is critical and that’s what the Philippines can provide.

Jamie McBrien: I think that’s absolute nonsense Wayne. We live in a global world, knowledge is global. Australian businesses that are embracing this are not leading edge, and not ahead of the curve. This is a mature business strategy. In the last 10 years it has really started to take off, and we haven’t seen our employment rise in Australia.

We’ve seen a change in the jobs mix, and at the same time we haven’t seen unemployment decrease in Philippines. Both countries are in a situation where the rising tide floats all boats, and we’re all coming up to a different level. We’re all working in different ways, and that is creating success for everyone.

For me, I think that’s a fantastic outcome, not only the businesses in Australia, and New Zealand and Europe, but for the Philippines and the world at large.

Jamie McBrien: I think the opportunities open for a range of businesses. I don’t think anyone is truly excluded from this as a strategy. We always talk about the fact there’s the like-for-like replacement but there’s also taking certain activities and pushing them to an offshore layer or building new and exciting services.

So, in every organization, if you think for those areas – there’s an opportunity there for everyone. Lots of people are embracing it, there’s a long way to go, and I think that it should be part of your consideration in your business strategy mix.

Wayne Bucklar: Which parts of the Philippines is suitable for outsourcing?

Jamie McBrien: There’s lots of locations people are outsourcing and offshoring to but for me, the big three – Manila, Clark and Cebu. But out of those three, the two really that I like to focus in on are Manila and Clark. Manila is the National Capital Region, it’s the capital of the Philippines. It has 22 million people and a couple of main CBD areas that are focused on outsourcing and offshoring one of the most densely populated greatest city regions in the world.

So, it’s a fantastic catchment area for a range of highly capable skill sets with an international airport, that supports the US, Europe and Australia. The other location Clark, 80 kilometers north of Manila. Great government support out there with over 380 foreign companies and a catchment area around 3 million people is also a great choice.

The decision between the two is based on customer requirement, the sort of skill sets that you’re looking for, and the functions that you are looking to build. It also has an international airport so it’s great you have access from Hong Kong, Singapore and South Korea or via a stopover in Europe, in the U.S. and Australia or you just drive up the road, that’s 80 kilometers from Manila.

Question: How do people get in touch with optiBPO?

Jamie McBrien: I can be found at jamie.mcbrien@optibpo.com. Shoot me an email or look at our website optibpo.com. It’s got a contact form on there as well as our general office details and some explanation on how we work.

Wayne Bucklar: Jamie McBrien, CEO of optiBPO. It’s been a pleasure having you with us today.

Jamie McBrien: Thank you Wayne. Thanks for having me.

Contact us today!
optiBPO is here to help you plan, build and manage your team, and our onshore support is there to ensure your offshore success.

This site uses cookies. By continuing to browse the site, you are agreeing to our use of cookies.

We may request cookies to be set on your device. We use cookies to let us know when you visit our websites, how you interact with us, to enrich your user experience, and to customize your relationship with our website.

Click on the different category headings to find out more. You can also change some of your preferences. Note that blocking some types of cookies may impact your experience on our websites and the services we are able to offer.

These cookies are strictly necessary to provide you with services available through our website and to use some of its features.

Because these cookies are strictly necessary to deliver the website, refuseing them will have impact how our site functions. You always can block or delete cookies by changing your browser settings and force blocking all cookies on this website. But this will always prompt you to accept/refuse cookies when revisiting our site.

We fully respect if you want to refuse cookies but to avoid asking you again and again kindly allow us to store a cookie for that. You are free to opt out any time or opt in for other cookies to get a better experience. If you refuse cookies we will remove all set cookies in our domain.

We provide you with a list of stored cookies on your computer in our domain so you can check what we stored. Due to security reasons we are not able to show or modify cookies from other domains. You can check these in your browser security settings.

These cookies collect information that is used either in aggregate form to help us understand how our website is being used or how effective our marketing campaigns are, or to help us customize our website and application for you in order to enhance your experience.

If you do not want that we track your visit to our site you can disable tracking in your browser here:

We also use different external services like Google Webfonts, Google Maps, and external Video providers. Since these providers may collect personal data like your IP address we allow you to block them here. Please be aware that this might heavily reduce the functionality and appearance of our site. Changes will take effect once you reload the page.

The following cookies are also needed - You can choose if you want to allow them: